Of all the wonderful attractions at Walt Disney World, there is one that checks off all the boxes for the whole family to go on. That one is Kilimanjaro Safaris in the Animal Kingdom.

When you have a bigger group or family going to Disney World, you often have to take into consideration different factors when going on attractions.

Factors like: someone is too short for the recommended height. Some rides might be too scary for someone, or not scary enough for someone else (silly teenagers).

The beauty about the Kilimanjaro Safaris attraction is it truly can satisfy everyone in your family group!  It isn’t too….anything!  Just right for everyone.

What is the Kilimanjaro Safari?

Located on 110 acres in the Animal Kingdom in Walt Disney World, the Kilimanjaro safari attraction makes up 20% of the entire Animal Kingdom park. Guests ride on an open-air safari truck which weaves it’s way around a realistic African reserve, full of African wildlife roaming free.

Disney has done an amazing job of replicating the forests, grasslands and savannas in a way that you have to keep telling yourself you are still in Florida. And being able to see all the live animals is a so amazing!

The entire safari ride lasts a bit over 20 minutes, has no height requirement, no age requirements and though it can get a little bumpy because you ride vehicles, there should be no motion sickness issues.

(Side note: we have a family member who gets motion sickness very easily and he has never had a problem on the safari. If you are still concerned, ask for a seat in the first row…you will be able to see out the front better and it will be less bumpy.)

What kind of animals will we see?

The beauty of the Kilimanjaro safari as opposed to a “real” safari is on this one, you will definitely see live animals. Disney does a great job of insuring that animals will be present.

All together there are 34 species of animals in the Animal Kingdom safari. You will have the chance to see many different animals including lions and other predators, giraffes, African wild dogs, gazelles, impalas, wildebeests, white rhinos and black rhinos, zebras, crocodiles and even hippos, elephants and other larger animals.

You can read more about that in the facts below.

Is there a best time of the day to visit the safaris?

Let’s start with the worst.  During midday, especially in the heat of the summer, the animals do what animals do in the wild, relax…chill…nap.  Consequently, you will see the animals but there probably won’t be a lot of movement.

On the other hand, first thing in the morning when the park opens and towards evening, the animals are much more apt to move and be overall more active.  The safaris will continue if it rains but not if there is severe weather.

Should we FastPass+ Kilimanjaro Safaris?

Update Fall 2021: Walt Disney World is no longer using FastPass+. This system is permanently suspended at the Disney Parks. In its place is Genie+, a new paid program to utilize Lightning Lanes. You can find out more information here.

At this time we are unsure of how Genie+ will impact Kilimanjaro Safari lines.

Obviously there are many factors involved in where you use your Fastpass+ but overall, we recommend that you indeed do try to use a Genie+ lightning lane on the safari. It is one of the busiest attractions along with Pandora.

We find that this is especially true if you want to visit the safaris during the evening when it really is at it’s busiest times for crowds. We have all the information you need to know about securing fast passes here.

Here are some fun and interesting facts about Kilimanjaro Safaris:

The Harambe Wildlife Reserve spans 110 acres making it the largest attraction by far! Your tour guide will drive you through open plains, shady forest landscapes and rocky wetlands.

Fun fact, you could put the entire Magic Kingdom park in the reserve!

2. Walt Disney was not involved in the creation of Kilimanjaro Safaris

He wasn’t involved, however, he did have the overall inspiration for it.  When Jungle Cruise was in its early development, Walt wanted real animals along the cruise route but he quickly realized how difficult this would be and settled for the audio-animatronics version we have today.  When the Imagineers began the concept of this attraction, they knew they were bringing Walt’s vision to reality.

3. The safari trucks aren’t on a track

The safari vehicle that take the guests through the parks are on a track, right?  Nope.  Unlike a lot of Disney World rides, this is the real thing baby!  The trucks are free moving and get a maintenance check every night to be ready for the next day.

They need to be real trucks because what happens if an animal decides to take a snooze in front of the truck? The tour guide needs to be able to move around the animal and keep on schedule.

You’ll get a different experience every single time you go on the safari due to the fact that the cast member is actually driving the truck!

4. The animals can roam free but not too free

Do the animals attack each other like in the wild? (Will I need to close my grandson’s eyes as a lion pounces on a zebra?)

Not to worry. Disney has gone to great lengths to allow the animal to freely roam but be contained in certain areas so as to not interrupt other animal species they may not get along with.

There are water barriers, moats, camouflaged walls, and other boundary fortification set up to keep everyone in their place. In addition, the animals are well fed and taken care of.

5. The rocks have both heat and a/c

Turn up the AC a bit, would you dear? The lions are truly the kings wherever they go. The rocks at the Kilimanjaro Safaris actually are air conditioned in the heat of the day and can be heated when it gets a bit chilly.

8. Disney has tricks to get the animals close to you

While yes, there are 34 different species in the main attraction, you likely won’t see all of them. They are, after all, wild animals that don’t necessarily want to be in view of humans!

Like all Disney attractions, this attraction is full of Disney magic! This magic is there to allow you to see animals up close.

Over two thousand pounds of manure is produced by the elephants alone each day. Of course, Disney uses it for fertilizer around the Disney property. Don’t get too close smelling the roses!

8. Cast members use sounds to call the animals at night

At night when it’s time for the animals to get into their jammies, the Cast Members call them in by many different sounds including, horns, bells, duck calls, whistles and even drum beats.

9. You can see amazing things even at night

The nighttime Safaris is pretty awesome! Disney has a permanent sunset state where the forests and savannas get highlighted in new ways. Disney has strategically placed lights throughout the safari to give the feel of both the setting sun and rising moon.

Since many of the animals in the safari are nocturnal, you’ll get a whole new experience even if you go to the safari on the same day both at night and during the day! Plan ahead if you plan to go on one of the night safaris! The wait time can be extra long at night since it’s such a popular attraction.

Your safari guides will be able to tell you details on the animals for both day and night time safaris.

You will love Kilimanjaro Safaris! We go on this attraction every visit to the Disney’s Animal Kingdom theme park. If you have little kids, be sure to read our expert tips for visiting the Animal Kingdom with toddlers. For example, we suggest this Disney park be the first park you visit on your vacation – find out why here! 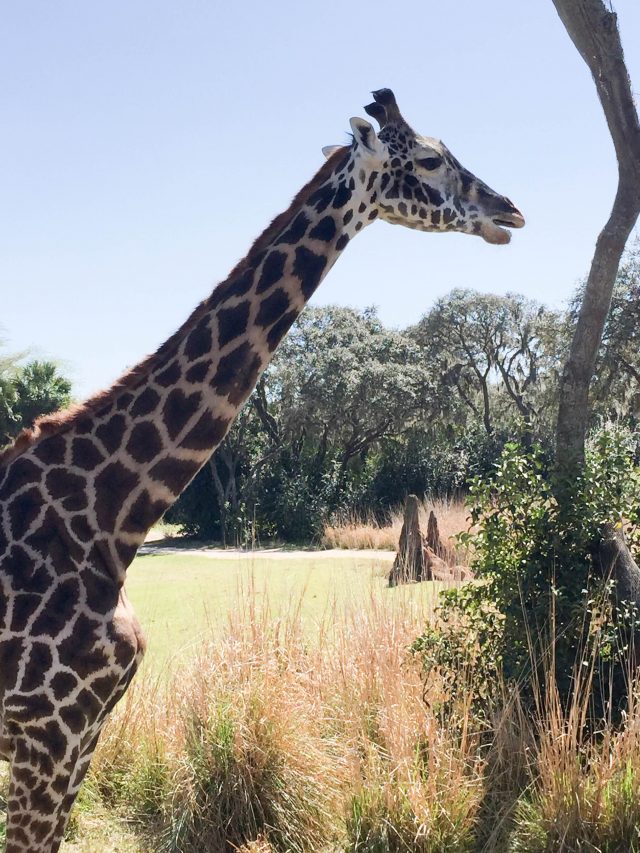