This post is dedicated to the ones we love to hate…or to be politically correct, the ones we love to dislike with great intensity! Disney has always understood that in order to have a great story, you need not only a great hero or heroine but also a great villain.

These Villains come in all shapes and sizes.  Some are human, some are animal and some are not of this world.

Some have small parts in the movie they are associated with and others have a bigger part than the hero. Some are naïve and even a bit off the wall, and others are just plain despicable.

The one thing they all have in common is we do not like them very much. In some cases, we despise them!

It is impossible to rank these villains from worst to worster (yeah, we know that’s not a real word) because much of the dislike comes from how the movie affected you when you watched it, so we are going to give you our favorite abhorred villains.

The Worst Walt Disney Movie Villains You Love to Hate

Villain Qualifications: This half-woman, half-octopus is large and in charge.  Complete with her own moray eel minions, Flotsam and Jetsam whom she refers to as her “babies”, she sets out to use her black magic to get revenge on King Triton and steal his trident.

With her lying, deception and sheer evil intentions, Ursula ranks up there with one of the worst villains. All this being said, she does give the film a bit of comic release at times with her antics and songs.

Villain Qualifications: Scar is as ruthless as they come. He is a murderer of his own brother and then he immediately tried getting rid of Simba in order to become leader of the lion pride.

Scar had an inferiority complex because he lacked brute strength, but he was very smart and somewhat of a narcissist.  He once said, “As far as brains go, I got the lion’s share”.  Scar is sarcastic in every way, insulting, boastful, manipulative and always looking to gain the upper hand.

Many Disney fans rank Scar as the worst of them all due to the lack of comedic relief and the overall evilness of his character!

Villain Qualifications: Maleficent first made her appearance in the 1958 film Sleeping Beauty but she is making a resurgence in the movie, Maleficent: Mistress of Evil.

She is dark, dramatic, and has an unlimited arsenal of magic powers at her command that she is not afraid to use.

Maleficent herself describe her skills as “all the powers of hell”. Lightening projection, divination and teleportation are just a few of these amazing powers. In fact, Maleficien is considered one of the most powerful villains in all of Disney’s history.

Disney is definitely using Maleficent to its financial advantage! Maleficient has an entire line of products you can buy. There are shirts, jewelry, Mickey ears, and more.

Villain Qualifications: Jafar had one over ridding goal in life and that was to possess the magic lamp containing the genie which would give him full control over the drone and world at large. In trying to fulfill that goal, Jafar would stop at nothing to achieve it.

With his pet bird, Iago, a sarcastic parrot, He uses disguises, sorcery, deception, dark magic and many other trickery to get what he wants.

Villain Qualifications: For starters, Cruella De Vil commits kidnapping and slaughters dogs!  She tries to kidnap and kill 99 puppies for a fur coat, but maybe the worst thing of all is she smokes these long stems with cigarettes in the end of them.

Always putting her vanity first, Cruella has really got some serious problems. She is short tempered, greedy, selfish, reckless and impulsive. The only good thing about her is that her two sidekicks, Jasper and Horace, are hilarious.

Additionally, you’ve got to admit, she has a great name and makes a wonderful Halloween costume like Dave’s daughter Jen did one year with her daughter as a little Dalmatian puppy!

Cruella De Vil can be found on Main Street in Disneyland!

Villain Qualifications: Putting poison into an apple to kill a sweet young girl just because she was prettier than her allows the Evil Queen, also know as Queen Grimhilde to make our horrible villain list for sure!

In fact she was voted the 10th greatest movie villain in cinematic history! She first appeared in the 1937 classic animated Disney feature film, Snow White and the Seven Dwarfs and is considered to be one of the most iconic villains of all times. She is clever, devious and heartless.

You can meet the Evil Queen at Story Book Dining at Artist Point on your next trip to Disney World!

Villain Qualifications: Yes, Mother Gothel is not as overtly evil as some of the others on our list but she is still a wicked lady.

Hoarding Rapunzel’s healing magic by keeping her locked up in a tower while posing as her mother to “protect” her from the evil outside world is just not a nice thing to do.

Mother Gothel is extremely selfish; she doesn’t care who she hurts or takes advantage of as long as she is happy and fulfilled. She manipulative and plays mind games that could produce lasting effects.

Most of all, she didn’t know how to love. It just wasn’t something she could do.

Mother Gothel will sometimes perform on Disney on Ice.

Villain Qualifications: slick as oil, this fast talking villain can talk his way into and out of anything.  He’s got a fiery temper and vendetta against his eldest brother, Zeus.  Hades plots and allies himself with others to get what he wants.

Villain Qualifications: It’s almost hard to put old Gaston in the same list as these others.  He is such a dim-witted and arrogant fool, he comes across as more comical than a villain.

However, the fact that he is convinced he can have and take anything and anyone he wants, makes him one of the more scary villains behind a pretty face Disney has produced.

Gaston is one of the most fun – and funniest – characters to meet in Walt Disney World! You can often find him outside of Gaston’s Tavern in Fantasyland. You can find some of our favorite Gaton quotes here.

Villain Qualifications: Claude Frollo was the exact opposite of Quasimodo.  As Quasimodo showed kindness, love and loyalty towards people, Frollo couldn’t do any of these things.  He was twisted in many ways.

Claude Frollo was cruel towards Quasimodo, lustful towards Esmeralda, and what made it the worst was that he used his powerful position as a religious man to justify his actions.

He is self righteous and thins he is better than everyone else. That attitude, combined with his position of judge, gives him one of the top positions in our list of Villains.

Villain Qualifications: Captain Hook had one great desire in life and that was to seek revenge on Peter Pan for cutting off his hand and feeding it to a crocodile. Along with this desire, he wanted to get rid of the eternal children.

If being a hate filled murderer wasn’t enough, he was a manipulator and trickster to everyone he came in contact with.  The only one Hook would tolerate was his sidekick, Smee.

Even after being cruel, short tempered and deadly to his crew, Smee somehow escaped his menacing personality.

If you are a fan of Captain Hook and Peter Pan, you might be interested in seeing all of Tinker Bell’s best quotes!

Villain Qualifications:  Everyone knows the term “wicked stepmother” but the cold-hearted, Lady Tremaine was the first.  Though she doesn’t physically harm Cinderella, she punishes her and psychologically abuses her in an evil, wicked way.

Unlike many of the evil woman in our list, she doesn’t possess any magical powers but her lies, deception, jealousy and manipulative ways of controlling Cinderella and others makes her a Villain closer to real life which can be even more frightening.

Lady Tremaine was voiced by Eleanor Audrey, who was also the voice for Maleficent!

Villain Qualifications: “Kill any human that steps foot in the jungle” is Shere Khan’s motto. This Bengal tiger is intimating and ruthless towards all in the jungle while keeping the jungle together at all times makes him a villain for sure.

Taunting and tormenting his prey with a condescending smile and relaxed demeanor gives Shere Khan a heartless, sadistic way about him.  He is definitely a villain and definitely a dark vicious adversary.

How Many Disney Villains Are There?

Believe it or not, there are over 35 Disney villains! If you add in every single film sequel, video game, book, and theme park there are over 125 villains.

Disney has capitalized (literally) on the popularity of their villains! Two franchise have emerged in recent years.

These are the most popular and recognizable female Disney villains. Think of these characters as the opposite of the Disney princesses! These villains are also referred to as Disney’s Bad Girls or simply, Disney’s Divas. 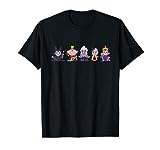 These are all the villains we love to hate! Walt Disney World embraces its iconic villains with special events. Disney Villains After Hours is a special ticketed event held in the Magic Kingdom park.

Run Disney also has had a villain themed event – we would love to see that come back! Check out the villain playlist Disney created here.

Now that you know some of the best Disney Villains, check out our favorite Disney villains shirts here or the best villain costumes here!

Be sure to check out all the best Disney sidekicks! We have 19 of our favorite characters listed here.